The Stewarts are just one family in Washington County forced to struggle with suicide in an area where demand for help far outweighs the number of mental health providers. 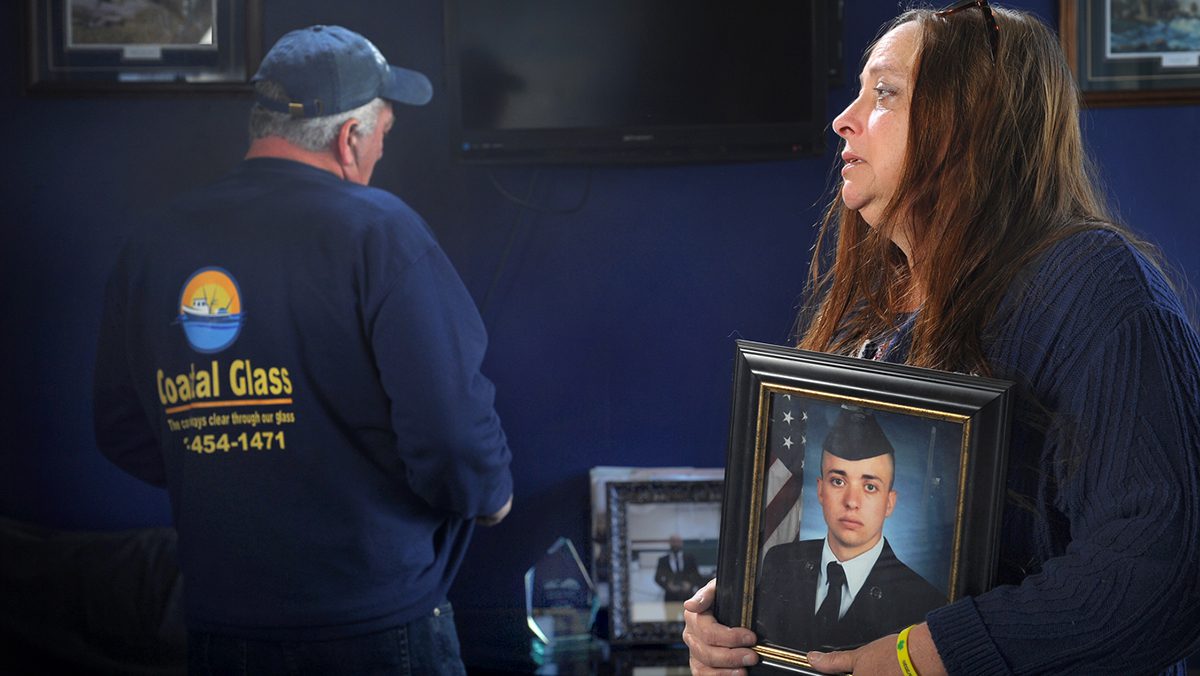 Three months after losing their son, Daniel, the grief is still overwhelming for Todd and Bonnie Stewart. The family’s plight is a glaring example of the lack of mental health resources in Washington County. Photo by Fred J. Field

His parents celebrated with him the night he moved in. His mother Bonnie brought chicken pot pie for dinner.

“We were playing music, celebrating,” she said.

The next morning, Daniel texted his two brothers and his parents. He told them he loved them and had thought about suicide for a while.

“He talked about his beautiful place and told us to enjoy it,” said Daniel’s father, Todd. “I tried to get to him, but he had left to go someplace else.”

Daniel drove to a remote area near his home and called 911 to report his death.

Daniel died on Dec. 8, 2020. He was 28. His death would be the first of four suicides during a two-month span in communities near Calais.

A veteran, Daniel served in the Air Force and was deployed to Qatar and Kyrgyzstan before coming home in late 2016. He helped his family open Coastal Glass in Calais and was proud to receive the St. Croix Valley Chamber of Commerce new business of the year award in 2017.

“I never expected it,” Todd Stewart said of his son’s suicide. “It was like the flip of a switch. Business was going good. He had a beautiful home. It doesn’t make sense to me at all.”

Since their son’s death, the Stewarts have tried unsuccessfully to get counseling for themselves and their youngest son.

“They’re booked right up with no openings for a long time,” said Todd Stewart.

Bonnie Stewart had sought help several months before her son’s suicide to treat her anxiety and depression, conditions she said she struggled with after living in foster homes as a child.

“I was told I could get help in Aroostook County, but I can’t travel four hours,” Stewart said. “Now my son just committed suicide, and I can’t find anybody to talk to. How sad is that? We’ve given up. We’re just going to have to get through this alone.”

The family’s plight illustrates how difficult it is to get mental health care in Washington County, said Clement Deveau, program director of Behavioral Health Services for Aroostook Mental Health Center.

“The bottom line,” Deveau said, “is we don’t have the providers to meet the demand for services.”

In a remote county beleaguered by high rates of poverty, unemployment and drug addiction, it is difficult to lure mental health workers from elsewhere.

“We’ve got a populous decline, economic challenges and significant poverty,” Deveau said. “It’s not the kind of place that attracts people looking for jobs.”

There are some therapist positions, Deveau added, that have remained vacant for years.

“We try to maximize the resources we do have,” Deveau said. “We contract with schools, where we have doubled our work. We can serve the community more easily in schools where kids are accessible.”

“A number of people are saying, ‘My suicidal ideation is related to the economy or the isolation,’ ” Deveau said. “That’s been worrisome to us throughout the course of the pandemic, and it continues to be worrisome.”

Daniel Stewart struggled with depression and post-traumatic stress disorder long before COVID-19 began spreading in Maine. When he returned from serving in central and western Asia, he was different, his mother said.

“He had PTSD from his time over there,” Bonnie Stewart said. “He also had anxiety and depression. He took medications but they didn’t seem to help.” 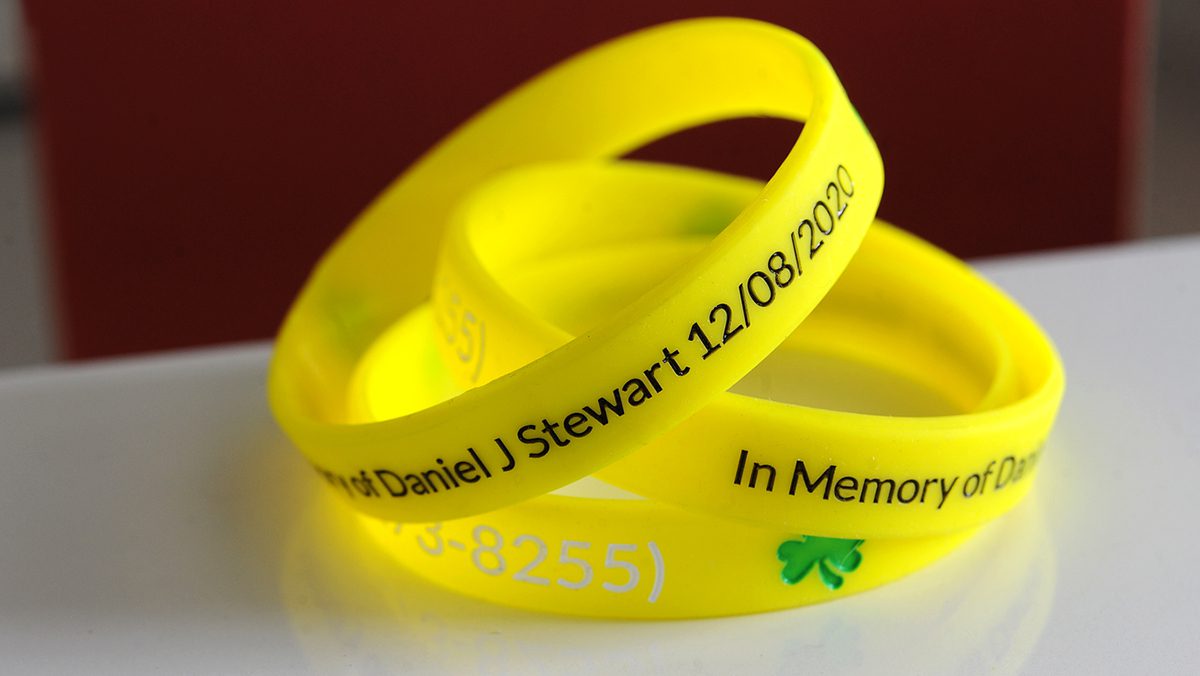 Bonnie and Todd Stewart had yellow wristbands made to honor their late son Daniel, who died on Dec. 8, 2020. Photo by Fred J. Field

When Daniel returned to his childhood home in Robbinston, he convinced his father to expand his glass company.

“I had been working out of my home for years, but Daniel wanted to expand,” Todd Stewart said. “We bought a location in Calais and he worked so hard to get it going.”

The Stewarts opened the company in early 2017 and named it Coastal Glass. They grew busy repairing windshields and installing windows, garage doors and “glass of any kind,” Todd Stewart said.

Though the business thrived and made over 1,500 glass shields for local schools during the pandemic, running a company during the state lockdowns and COVID-19 restrictions was challenging.

“We had payroll to pay and people wanting layoffs because they had schoolchildren who were home,” Bonnie Stewart said. “It was a lot on Daniel’s shoulders.”

As the pandemic stretched on, Daniel privately battled his depression. Sometime during the fall, he stopped going to the therapist he saw through the Veterans Administration.

“We didn’t realize he missed three appointments,” his mother said. “We didn’t know how much he was hurting.”

In early December, Daniel bought a small house on Pleasant Lake in Alexander. He had lived with his family for the past eight months to save money for the home.

“Daniel loved the water,” his mother said. “He loved everything outdoors, fishing and swimming.”

The first day he moved in, Daniel invited his parents over for dinner. They ate Bonnie’s homemade chicken pot pie and helped Daniel settle in.

“You’re going to be so happy here,” Bonnie Stewart told her son, “You’ll make so many good memories.”

The next morning, Todd Stewart called his son but quickly hung up. Daniel had said he wanted the day off to unpack.

“I forgot you were taking the day off,” Todd Stewart texted. “I love you.”

“I love you, too,” Daniel replied.

A short time later, Daniel drove to a remote part of Alexander and ended his life.

On a warm March 17 afternoon, the Stewarts stood behind the counter inside their Calais glass shop. The family offered customers coffee and donuts with green sprinkles in honor of St. Patrick’s Day. They also offered yellow wristbands with the words: In Memory of Daniel J. Stewart 12/08/2020.

“Today is Daniel’s birthday,” Bonnie Stewart said. “He would have been 29.”

Stewart held a photograph of her son in his Air Force uniform and pointed to another picture hanging on the wall. The image captured Daniel smiling while accepting the local chamber’s 2017 New Business Award.

“He was so proud of that award,” Bonnie Stewart said, her eyes welling with tears. “He had an incredible work ethic.”

Todd Stewart listened quietly to his wife and turned to wipe his own tears. He and Daniel spent many hours together working in the shop and installing glass. Though he finds solace in keeping busy at his family’s business, he is surrounded by memories of his first-born son.

“What bothers me is that he never talked to me about his feelings,” Todd Stewart said. “We were so close. I always told my sons, ‘if you need something, come to me.’ ”

Stewart still talks to his son and sends him text messages.

Four months after Daniel’s death, the Stewarts have given up on finding counselors in Washington County.

“All we have up here is ourselves,” Bonnie Stewart said. “And it’s not enough.”

Stewart, like others in her community, wants to help create support groups and a National Alliance on Mental Illness affiliate in Washington County. She also wants to find ways to reduce the stigma around mental illness.

“People in Washington County work very hard to make a living,” Bonnie Stewart said. “We have a lot of proud people who don’t want to talk about their troubles, but the stigma around mental health has got to stop. You can only stuff your feelings for so long.”

A former family advocate for Head Start, Stewart has reached out to other families who lost a loved one to suicide this winter.

“It’s a horrible way to lose a child,” Stewart said. “I don’t want another mother to have to feel this pain.”

Over the past few weeks, Stewart and her husband have spent time at their son’s home.

“It’s a quiet lake and the water is very soothing to me,” she said. “I feel close to Daniel when I’m there. I can feel his presence, and it does give me some kind of relief.”